We were commissioned by a commercial client to design and integrate a high-end audio visual system throughout their home in the south east of London with distributed satellite, an aerial multi switch system and a high-end home cinema system.

Throughout the system design process we consulted with the client, building contractors and architects on how the audio visual installation we proposed would be incorporated into the surroundings.

After all system plans and the design had been agreed, first fix installation commenced, including cabling for the distributed audio and speaker cables for the in-ceiling speakers.

A number of wall mounted Plasma, LCD and LED TVs were part of the installation with specific cabling to-and-from Freeview and Sky HD systems to be run, including HDMI, Coaxial and Cat6 network cabling.

The coax cabling was guided through RF distribution amplifiers and a multi-switch system to distributed the digital TV reception and satellite signals to all TVs in the home.

iPad or iPhone control is used for the high-end bespoke Home cinema system, dropping the electric powered recessed projection screen and turning on the home cinema system for sleek and seamless usage.

The high definition 3D projector installed within the home cinema room is set with HDMI cables that are capable of accepting the three-dimensional signal from Blue Ray Inputs and Sky 3D to ensure the room looks and sounds like a home cinema should.

The audio visual installation project had many parts which all successfully linked together. Including the previously mentioned elements there was also: -

We delivered this outstanding project on-time, within budget and according to the exacting specification from the client. 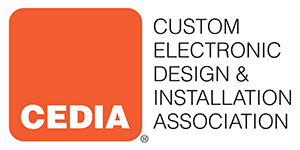 Or, fill in the form below and we can contact you...